Becky is healthy after surgery at KC Bariatric “I remember thinking about bariatric surgery probably two years before I had it, (secretly in my head). I was afraid to say it out loud and ashamed that I knew I needed it. My entire family was overweight, my grandma, mom, aunt, then sister eventually, and now me. I wasn’t always, only for about 10 years. It started out 10 pounds, diet, fail, diet fail. Then 30lbs, then eventually the scale said 234lbs. My life revolved around Starbucks sugary drinks, stretchy pants, and staying home because I was ashamed of how I looked. I had two children who would love me no matter what and a husband who, let’s say I married up. He supported me no matter what. I finally found the courage to say out loud that I wanted the surgery. He said he didn’t want me to think he needed me to have it and to only do it for me. So, I did the research and insurance and all the steps. I was afraid, terrified actually. I’d had horrible complications with two c-sections, but I decided I’d rather die getting surgery than live fat and embarrassed. Well, who knew that I almost would?

I got my first surgery in April 2016 by a general surgeon my niece worked for, he had ZERO bedside manner, was rude, and treated you like…crap, but I didn’t know better. So, I had the sleeve. When I woke up I could barely breathe. I panicked all day (he kept saying it was anxiety from having surgery). So, the next day they took me back to surgery. He had repaired a hernia and sewed my diaphragm up to where I could barely take a deep breath (kind of important). So, I went home, and over the next two months, I slowly started to follow the eat soft food path, but I couldn’t. I’d throw up and his nurse kept saying it was normal. He told me I needed psychiatric medicine because I was depressed and had buyer’s remorse for getting surgery. So, I eventually became too scared to call his office. I went 30 days without eating hardly anything, throwing up 5, 10, 15 times a day. My husband said you need a second opinion, so I called KC Bariatric and they said they’d see me. 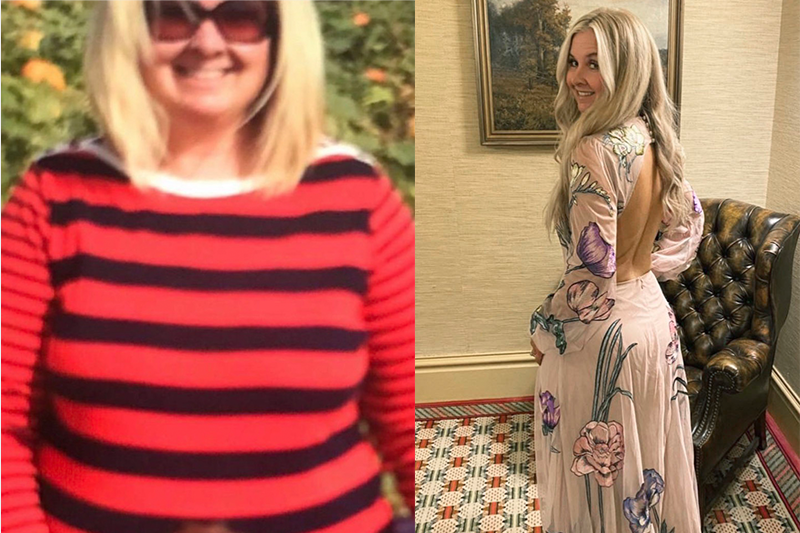 I got placed with Dr. Hamilton and he was so nice. I brought him all my medicine bottles and he explained I’d need a revision to RNY. He confirmed my sleeve had been sewn so small it would never hold food…YIKES! They looked at his schedule and scheduled me for the next week. A day or so later, I was so sick they told me to go to the ER, I was admitted and they explained my potassium was so low they couldn’t operate because I could have a heart attack. I was given a PIC line to give me multiple rounds of potassium, TPN (liquid food). After about 3 days, Dr. Hamilton came in late at night all dressed up in a suit to check on me and tell me he’d be doing my surgery the next morning, on his day off. Talk about doctors who care about their patients, (and I wasn’t even his patient originally). So, I had revision to RNY and when I woke up, I already felt better.

I went home with the PIC line for a week. My husband gave me blood thinner shots in the stomach. My son made me a ‘How do you feel today/ smiley face chart.’ My husband held me up in the shower because I was too weak and dizzy to stand. My hair fell out in giant clumps. Eventually, after about 5 months I started feeling strong. I was losing weight, doing more exercises, and feeling grateful. Fast forward to 2018, I started getting severe stomach pains on and off. After several trips to the ER, I had to be admitted on Memorial Day weekend. My stomach had herniated and needed emergency open bowel resection surgery. I was ‘batting a thousand’ because in 2016 I missed my daughter’s 16th birthday because I was hospitalized and then in 2018, I was hospitalized on her 18th. She said ‘you know if you don’t want to celebrate my birthday, just say so.’ So, I spent 4 days in the hospital and then home to recover. You may be thinking- umm just what I was afraid of, complications, problems. Most people don’t have complications like mine and mine were mostly all from a surgeon who was not capable, and that’s NOT KC BARIATRIC! Also, the facts are if you’re morbidly obese you probably ARE going to die from a heart attack, stroke, type 2 diabetes or, just from never living. So, full disclosure, I’d do it all again- twice, to not weigh 234 lbs. I went from a size 18/20 XXL to a 4/6 XS/S and 138-143lbs. I’ve had 6 years of healthy time with my family, feeling beautiful, and feeling included. I’m not missing out on anything. Being healthy during this Pandemic where obesity is a grave comorbidity, has maybe saved my life twice.

So is it easy? No, not always. Am I perfect? No, BUT, I weigh every day to keep a handle on any missteps, and I have them occasionally. I’ll gain 2,3, 5 pounds and I give myself the pep talk and the pictures of me before. I remember the depression I felt. I tell myself to calm down, and just back up slowly. I follow the ‘rules’ of protein first, then veggies, then fruit. I try to exercise every day. Sometimes I don’t, and sometimes I eat ice cream and cake. Then, I do better. I’m not perfect because perfect makes you panic. No one is perfect. I do have one “rule,” I almost never eat fast food. It’s CRAP no matter what bun, sauce, or diet soda you get. That food is NOT food. So, I cook, eat mainly organic and try to make that a hard rule. So don’t try to ‘skirt’ the rules. Don’t play the ‘I don’t want to have to change my routine or life’ or ‘I don’t have time to cook.’ I homeschool my son, work, and cook three meals a day. Sitting in a drive-through line takes WAY longer and that’s how we all got in this condition. So, do yourself a favor and definitely don’t go back to that habit. Our health is Invaluable! It’s time with children or grandchildren. It’s having a baby you never could have when you are overweight. It’s no medications. It’s going to college or getting your dream job, or dream vacation, and dream LIFE. It’s making your family proud, yourself proud. It’s being a role model and encouraging someone else to get surgery. It’s a whole new group of bariatric friends. It’s the reason people like Dr. Brice Hamilton leave their families and work countless long hours, nights, and holidays. They miss their time spent with their family, so you can live to spend time with yours. So, I’m forever incredibly grateful, humbled, and will always try my best to be successful. Take the leap… live your best life.”